2022 Wasn’t the best year for cryptocurrencies, as all assets lost tremendous value. That momentum caused an ongoing decline in DeFi TVL and interest. It will be interesting to see if 2023 will offer an improvement and whether Lido can retain its top position.

There is tremendous interest in liquid staking these days. It is a solid way to support top networks by staking, yet users can retain their liquidity without concerns. Lido is the market leader, even though other liquid staking providers exist. Decentralized finance must have users distribute their assets across various protocols, rather than support only one “provider”.

That said, Lido has a dominant market position. It represents nearly $7 billion in Total Value Locked, putting it ahead of MakerDAO and Aave. It is worth noting those latter two protocols were each above $15 billion in early 2022. However, the collapse of the Terra ecosystem and the ongoing decline of crypto assets has pushed the projects well below that TVL. It seems unlikely either Aave or MakerDAO will return to $15 billion in 2023 unless all markets go through a massive bull run.

On the other hand, Lido seems poised to hit $10 billion in 2023. It supports all popular blockchains, including Ethereum, Solana, Moonbeam, Moonriver, and Terra Classic. Ethereum’s swift to proof-of-stake in 2022 has given substantial rise to liquid staking, primarily through Lido’s smart contracts. Solana remains a popular network, although it suffers some blowback from the FTX collapse and its association with Sam Bankman-Fried. However, the project’s public perception will recover eventually.

Moreover, Lido’s TVL appears to rise more quickly than other DeFi protocols. That is surprising, as it relies a lot more on higher prices of crypto assets. Only so many people are willing to engage in liquid staking, although it remains a lucrative way to make money. It will be interesting to see if Lido retains its dominant position once Ethereum staking rewards start to unlock. That will require a new network upgrade, which still has no official release date.

Will Anyone Threaten Ethereum?

One thing that likely won’t change in 2023 is Ethereum’s dominance. The network has over 600 active protocols and represents $50.3 billion in TVL. That gives it a market share of nearly 67%. making everything else virtually irrelevant. Its only “competitors” are BNB Chain ($7.3 billion) and Tron ($4.63 billion). It is remarkable to see Tron in the DeFi top 3 by TVL, despite only having 14 protocols. Unfortunately, DeFi development has stalled on that network in recent months.

Moreover, only six networks have over $1 billion in TVL. Avalanche, Arbitrum, and Polygon have all proven worthy additions. Every blockchain or L2 solution not making that cut likely won’t make it in 2023 or beyond. A network like Solana dropped to under $530 million in TVL, despite being a top 10 network by market cap. It illustrates that people don’t necessarily want an alternative to Ethereum; they want unique, fun, and rewarding DeFi protocols. 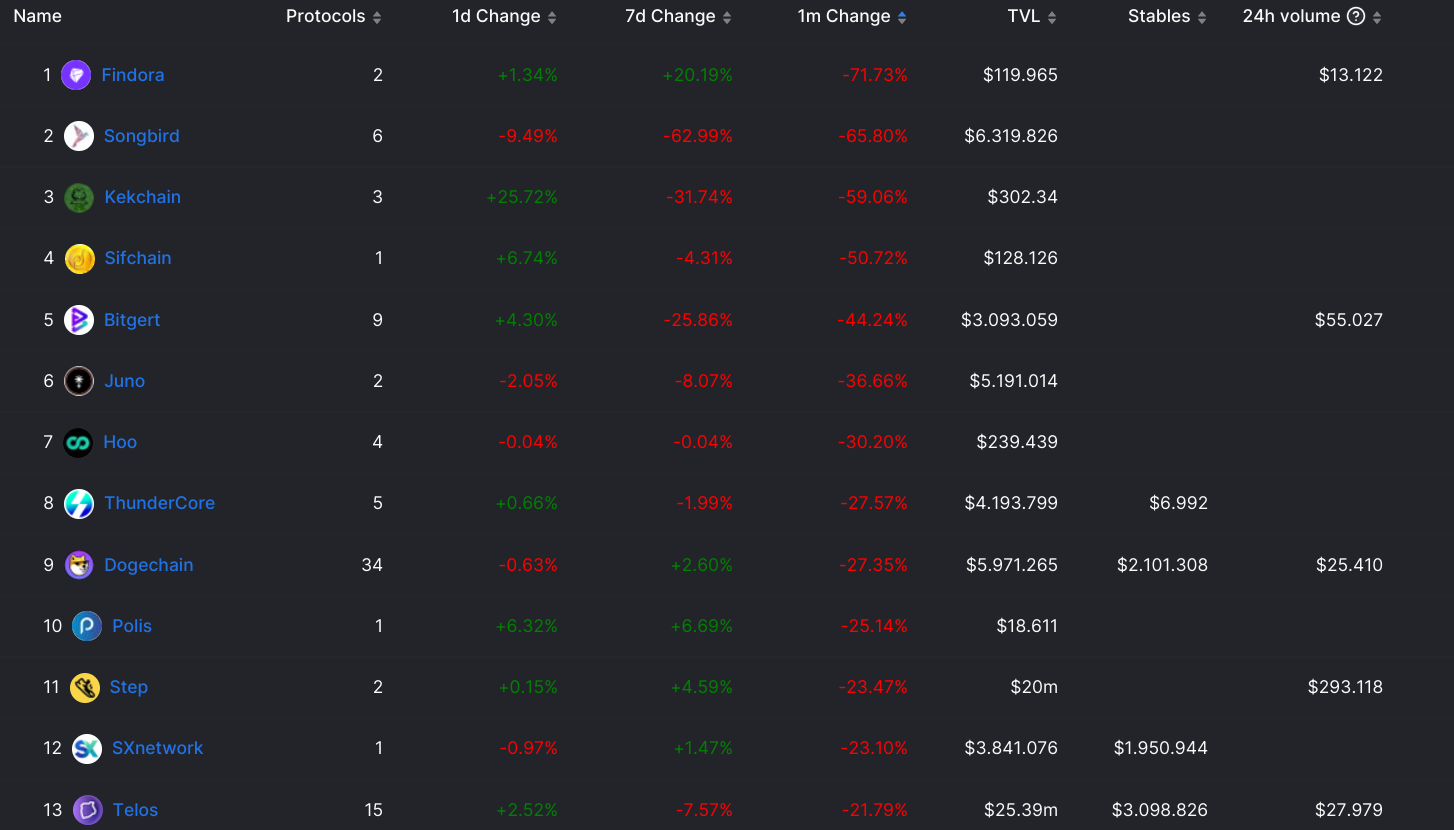 Moreover, smaller networks like Findora, Kekchain, Hoo, VeChain, Telos, and EthereumPoW are on their last legs. These networks lost between 20.8% and 71.7% of their TVL in the past month. There isn’t sufficient interest in these networks or their decentralized finance solutions. Developers might be better off building projects for networks with sufficient liquidity rather than chasing a TVL of under $30 million.

None of the information on this website is investment or financial advice and does not necessarily reflect the views of CryptoMode or the author. CryptoMode is not responsible for any financial losses sustained by acting on information provided on this website by its authors or clients. Always conduct your research before making financial commitments, especially with third-party reviews, presales, and other opportunities.