Litecoin is a decentralized peer-to-peer payment transfer protocol inspired by Bitcoin. It is one of the few cryptocurrencies that has regained its previous support level quickly after the downfall due to the FTX liquidity crisis.

It suggests a positive momentum and future growth of Litecoin in the long term. However, should you invest in LTC in 2022? Read our Litecoin prediction to know!

At the time of writing this post, LTC was trading around $57.70, which creates a positive sentiment for the short term. The candlesticks are forming in the upper Bollinger Bands with positive RSI that suggests it may cross the previous resistance of $63 within a few weeks. In the last five months, it was consolidating between $50 and $63.

In the first week of November, Litecoin started an uptrend but quickly changed momentum after the FTX liquidity crisis hit the market. However, Litecoin quickly regained its previous support within one week.

While many cryptocurrencies are forming their yearly lows, the current LTC price is well above the yearly low, which suggests a higher low pattern for the long term. On the flip side, MACD is still bearish, with red histograms that suggest consolidation in the next week, but the overall short-term sentiment is bullish for LTC. 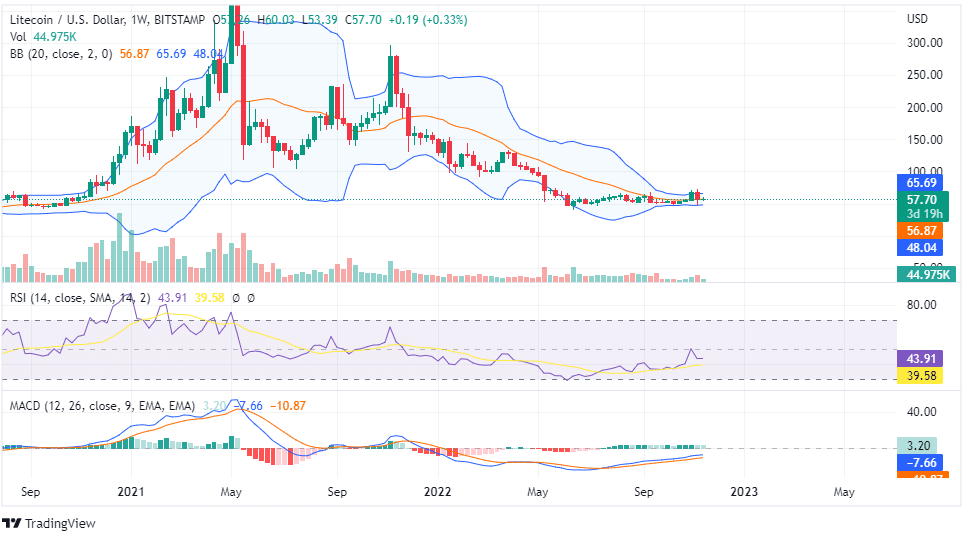 On the weekly chart, Litecoin candlesticks are forming around the baseline of the Bollinger Bands, and it held long-term support of $50 in the last few months. Based on the popular technical indicators, we think it is the right time to invest for the long term because the LTC price is around the strong support level, and if it breaks the resistance, it may not come to this level again.

Litecoin is popular for small transactions, unlike Bitcoin, which is primarily used for large amounts. LTC has a limited supply, so investors can expect a price surge in the next few years. The marketing team is also working hard to extend their use cases, but the future will depend on market adoption.

Litecoin is a fundamentally and technically strong altcoin, which should be a part of your long-term portfolio, so it is a good time to accumulate LTC for the long term.