Ubisoft is making drastic business decisions to reduce spending and overall risks. Now is a great time to eliminate one of the riskiest moves in gaming right now: NFTs and blockchain.

Ubisoft was the first mainstream publisher to embrace Quartz NFTs. The risk-to-reward ratio simply wasn’t favorable. Quartz was a significant failure insofar as sales revenues and also damaged Ubisoft’s reputation in the process. This is a mistake that probably should not be continued even in the best of times, but that goes double for the current inflation-laden games industry environment.

Publishers are currently being challenged by an uncertain global economy. Consumers are spending less on games; according to Newzoo, overall industry-wide spend was down over $8 billion in 2022. Ubisoft plans to battle these conditions by reducing risk and spending, and has laid out a business strategy to investors.

The plan, which led to a crash in Ubisoft shares, includes the cancellation of 3 games, delaying Skull and Bones, and a €‎500 million loss in non-IFRS operating income for the fiscal year ending March 2023.

Ubisoft is also prepared to “divest non-core assets” to reduce costs, which could mean it may sell unwanted or unused video game IPs.

Considering Ubisoft’s traditional plan isn’t working great in this kind of economy, it is not the right time to double-down on speculative and risky business ventures such as NFTs and cryptocurrency.

I’ve already outlined why I believe Square Enix should drop, or significantly reduce, its investment spending on blockchain-powered games. I’d present the same case in regards to Ubisoft’s position. In a past article, I argued that Quartz NFTs were simply bad business.

The reality is that cryptocurrency is just too volatile. The value of these currencies can fluctuate rapidly on a whim and reduce overall value–or perceived value–of any digital good. Ubisoft spends real money developing cosmetic items–armors, weapons, etc–and the returns simply are not even remotely close to being guaranteed.

Apart from investment losses, consumers have no guarantee their NFTs or crypto-based goods will even survive. Most live games come to an end at some point, and any in-game items lose all value once the game is shut down.

Another major risk is simple brand disruption and PR fiascos that Ubisoft will face (or marginally ignore).

As Ubisoft doubles-down on core business practices like monetization, live services, and increasing pressure to innovate on new ways to spark player spending, the weight of NFTs, crypto, and blockchain is just too much to bear for popular video game franchises that are already being stressed by the above mentioned business practices. 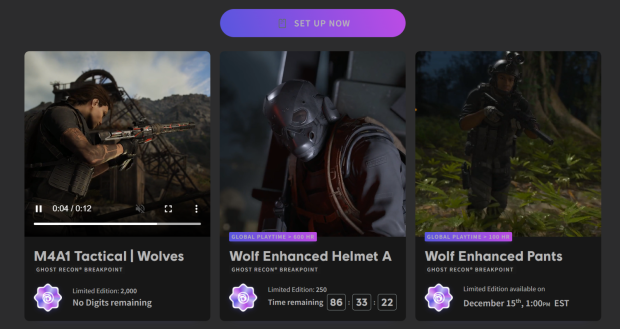